By Carl Bialik,  Grim reports about the war on cancer have masked significant signs of progress against the disease.

In recent years, it has been hard to avoid hearing that the fight against cancer has been largely futile.  News stories have cited government statistics showing that death rates from cancer have barely budged, even as major progress has been made against heart disease. It is a humbling and disheartening return on tens of billions of dollars of investment in research.

But some statisticians and epidemiologists say that aggregated death rates conceal promising numbers. The U.S. government compiles cancer-mortality data from death certificates each year. When researchers assess trends in cancer survival, they typically compare today’s numbers with those from 1950 or 1975, two years that marked important improvements in collecting these data. But relying on those dates cloaks what researchers say are significant gains in the past decade or two.

The benchmark date is critical when evaluating the fight against cancer. The American Cancer Society doesn’t agree with the grim conclusion that arises from comparing today’s death rates with those in the 1950s. ACS prefers to contrast today’s rates with those in the early 1990s, when overall cancer deaths peaked. The nonprofit health organization argues that without public-health and medical progress, cancer mortality rates would have continued to rise. Instead, in the past few years, they have started to fall from peak levels.

“We bent the curve,” says J. Leonard Lichtenfeld, deputy chief medical officer for the society. “Hundreds of thousands of deaths have been avoided.” The society counts more than 650,000 cancer deaths averted. While that might be an overstatement, it shows how many ways the data can be sliced.

Another important sign of progress hidden in headline numbers is that cancer’s victims are dying at older ages. That means more years of life have been preserved, even as people eventually died from the disease. Also, individuals born since 1925 have seen lower cancer mortality rates at every age compared with individuals born before that year.

People born before 1925 “did not have time to take full advantage of the observation that smoking causes lots of cancers,” says Eric Kort, a pediatrics resident at Helen DeVos Children’s Hospital in Grand Rapids, Mich., “nor to take advantage of some of our early screening methodology, such as colonoscopy.” For Americans born since that time, “we’ve made enough progress that we have transformed the risk of cancer across the lifespan,” says Dr. Kort, who co-wrote a paper on the topic published last month in the journal Cancer Research.

Progress among younger patients has been especially impressive. Cancer mortality rates for Americans in their 40s born between 1955 and 1964 declined by 35% compared with Americans at the same age born in the 10-year time period three decades earlier. But because most cancer victims are older, critical progress in saving young people has been obscured in statistics for the broader population, according to Dr. Kort. Weight each age range equally, and cancer rates started declining steadily in the 1960s, not 25 years later, as overall death rates would suggest. “It shows some things that often get masked,” says Brenda Edwards, associate director of the National Cancer Institute’s surveillance research program. 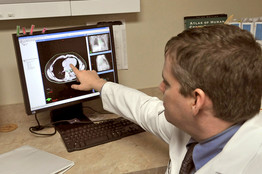 A radiation oncologist views a CT scan of cancerous lungs at a Philadelphia cancer hospital.

Most cancer epidemiologists acknowledge that the gains still fall far short of what many had hoped to see when President Richard M. Nixon declared a war on cancer in 1971. Still, they resist the comparison with steep declines in heart-disease mortality.

The pessimistic cancer coverage has implied that if heart-disease death rates fall, so should cancer. But that view offers a distorted picture of progress against cancer. “People have to die of something,” says Robert Anderson, chief of the mortality statistics branch of the federal National Center for Health Statistics.

Typical cancer-mortality studies do take into account the fact that people are living longer, through a technique called age adjustment. This approach factors in the aging of the general population, but it doesn’t fully reflect that people often are surviving longer following a cancer diagnosis. A preliminary analysis by Dr. Kort shows that cancer took at least 10% fewer years of life, per capita, in 2004, the latest available data, than in any year between 1966 and 1996.

Delaying death is a tangible victory for a patient newly diagnosed with cancer, but it barely budges overall mortality rates. Donald Berry, head of the division of quantitative sciences at the University of Texas M.D. Anderson Cancer Center, offers the example of pancreatic cancer, which has a typical survival time after diagnosis of just a year. “Suppose by some miracle we could give everyone with pancreatic cancer an extra year of life,” Dr. Berry says. “Pancreatic-cancer mortality would drop to zero in the first year after the miracle. But then it would return to its previous levels, with deaths occurring one year later than previously.”

Another significant change is that progress against the various forms of the disease has varied tremendously. While there has been more focus in recent years from the Centers for Disease Control and Prevention on breaking down cancer into individual diseases, “We’ve maintained cancer as its own category,” Dr. Anderson says.

John Bailar, professor emeritus of health studies at the University of Chicago, has become considerably more positive about the fight against cancer since co-writing an article titled “Cancer Undefeated” in the New England Journal of Medicine in 1997. “My general sense is that mortality rates for cancer are going down,” Dr. Bailar says. “There’s no doubt about it, and that’s very good news.”

He adds: “I don’t think we’ll ever get to zero for cancer, basically because it is a collection of a lot of different diseases. I don’t think there is any form of treatment that will take care of all kinds of cancers.”

Nor is there any single statistic that can successfully represent progress against the collection of diseases, says Dr. Berry. “Every measure that I can think of is flawed.”

President Richard M. Nixon declared a war on cancer in 1971. A previous version of the column had the incorrect date.