The word “streamlining” is heard with increasing frequency in oncopolitics these days, as NCI, FDA, industry, academia, and advocacy groups push back on clinical trials that, to quote the FDA Cancer Czar Richard Pazdur, have become “mind-bogglingly complicated.”

Tangible change seems to be within reach, as the field converges on strategies to:

Pragmatica-Lung is positioned to establish a standard for trials that collect only the data needed to inform a single endpoint—overall survival.

This is possible because the safety profile of the two drugs in question has been thoroughly studied, and because a survival advantage has been established in an earlier phase II study, which was a part of Lung-MAP, a master protocol trial (The Cancer Letter, Feb. 21, 2020; Nov. 15, 2013). 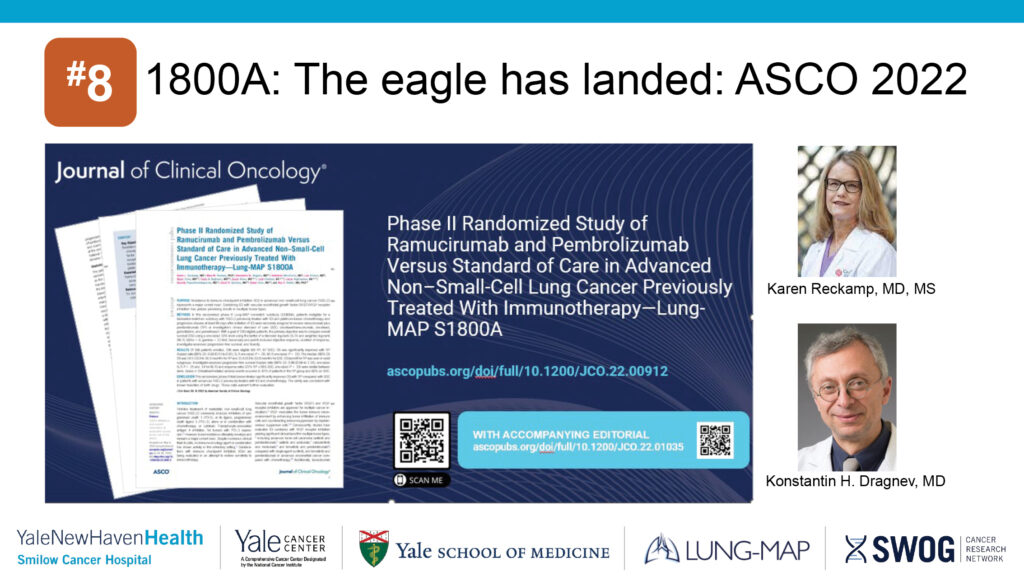 “It really boils down to [the fact] that clinical trials have got to serve the needs of the patients and their care providers. And that’s what we’re focused on,” NCI Director Monica Bertagnolli said during the Nov. 17 Friends of Cancer Research annual meeting.

“Let’s talk about Pragmatica. That’s a great example,” Bertagnolli said. “So, you have a result in patients with non-small cell lung cancer with advanced disease that came out of Lung-MAP. There’s a signal here, but we need to know more. We need to know whether a two-drug combination can really benefit patients with recurrent or advanced lung cancer; right?

The design and development of Pragmatica-Lung came about through what insiders describe as unprecedented collaboration across oncology.

“I’ve never been on a call where so many people agree and want to do things differently.” Ellen Sigal, chairperson and founder of Friends of Cancer Research, said in a conversation with The Cancer Letter. The conversation with Sigal appears here.

In a conversation with The Cancer Letter, Roy Herbst, vice chair for Developmental Therapeutics at SWOG Cancer Research Network and chair emeritus and senior advisor of the Lung-MAP study, described multiple synergies that led to the Pragmatica-Lung study.

“We had two drugs that we used in that refractory population that had come through some phase I studies. One was pembrolizumab, of course, a PD-1 inhibitor, and the other was ramucirumab, a VEGFR-2 antibody inhibitor; both antibodies,” Herbst said. “And because of our Lung-MAP public-private partnership, we were able to get the two pharmaceutical companies, Merck and Eli Lilly, to work together. We delivered the treatments through the entire National Clinical Trials Network. A true example of intergroup collaboration.”

The conversation with Herbst appears here. 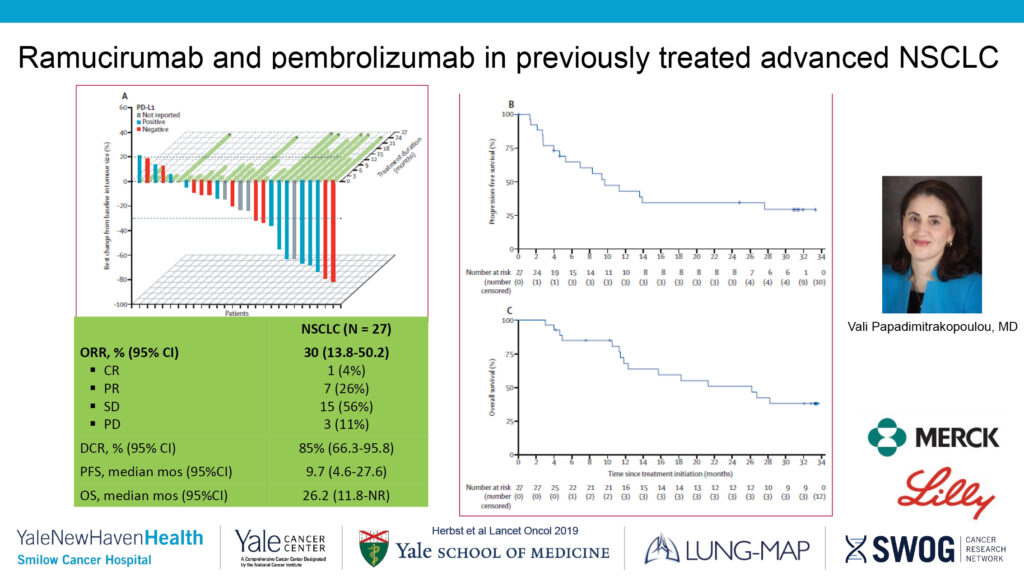 “While the S2302 Pragmatica-Lung trial focuses on a narrow therapeutic question, the principles it embodies will be widely applicable to clinical oncology research going forward. I think it will be—and I don’t toss this phrase around lightly—a real game-changer,” Charles D. Blanke, group chair of the SWOG Cancer Research Network, said to The Cancer Letter.

“Development of a pragmatic trial in lung cancer is a major step forward in how we conduct clinical cancer research,” O’Dwyer said to The Cancer Letter.

Pragmatica-Lung grew out of a recent phase II study, the Lung-MAP S1800A clinical trial. Combination ramucirumab and pembrolizumab showed a promising survival benefit in second-line NSCLC, a population that has limited treatment options.

The results of the S1800A phase II trial were reported at the 2022 annual meeting of the American Society of Clinical Oncology and published in the Journal of Clinical Oncology. The hazard ratio reported in S1800A was 0.69, which suggested that there was an improvement in the patients who got pembrolizumab/ramucirumab versus standard of care—docetaxel, docetaxel/ramucirumab, gemcitabine, and pemetrexed.

When the data were brought to FDA with a request for a Breakthrough Therapy designation, Pazdur suggested a pragmatic trial.

“This came to me in kind of a lightning bolt when I saw a small trial that was done under Lung-MAP,” Pazdur, director of FDA’s Oncology Center of Excellence, said at the recent Friends annual meeting.

“I’m not interested in the safety of these drugs. If we don’t know the safety of pembrolizumab at this time, after being used, I think, on a million patients, we better fold up our shop here, and likewise for the other drug. I’m only interested in one thing, one thing only. And what is that? Is there a survival advantage here?”

The therapy has received the Breakthrough designation.

Trials need to be designed to address relevant questions, Pazdur said. “We’ve made these trials way too complicated, just mind-bogglingly complicated,” he said. “When I take a look at informed consents that go on for 20 pages—no patient will read this. This field is evolving so fast, we have to answer the questions relatively rapidly.”

Pazdur said Pragmatica-Lung also has the advantages that come with randomization.

In October, the FDA Oncologic Drugs Advisory Committee recommended against approval of a real-world evidence-based application that relied on a synthetic control arm that wasn’t time-matched to the treatment arm (The Cancer Letter, Nov. 4, 2022).

The results from Lung-MAP S1800A presented a unique opportunity to test run a pragmatic trial. This made sense because of a combination of factors: the promising survival data from the phase II trial, strong safety data collected over years of pembrolizumab and ramucirumab being used as monotherapies, and the need for effective treatment in second-line immunotherapy-refractory NSCLC.

“My plea was to get it done quickly, to not look at process, but look at outcome, look at the ability to do things that were going to be important for patients rapidly,” Sigal said to The Cancer Letter. “And it is my belief that this may be a model to inform the conduct of some future similar trials. We don’t have to make them overly complicated.”

Discussions of the trial began in June, and next January—less than seven months later—the trial is expected to begin enrollment.

During that time, Bertagnolli, a long-time chair of the Alliance for Clinical Trials in Oncology, became the NCI director.

“Let me tell you, one of the things I think we share entirely with FDA, as our partners, is that it’s our job to bring the patients and their caregivers—the doctors, and sometimes their family—what they need. You know, that is our complete focus,” Bertagnolli said at the Friends meeting.

For NCI, Pragmatica-Lung is one among a series of actions toward streamlining clinical trials.

At the Nov. 9 meeting of the Clinical Trials and Translational Research Advisory Committee, an interim set of guidelines was approved which limits data collection to information necessary for the endpoints of adult, late-phase, IND-exempt trials (The Cancer Letter, Nov. 11, 2022).

At the CTAC meeting, Bertagnolli defined the NCI’s “core principles” for the NCI under her leadership, which include modernizing clinical trials (The Cancer Letter, Nov. 11, 2022).

“The core principles are: getting the patients what they need and doing our research in a way that really produces results that are accurate and reliable, so that they can change care,” Bertagnolli said at the Friends meeting. “So, if that is the primary focus, and you’re innovating around that focus, that’s how, I think, progress can be made.”

Fit-for-purpose research design is a key factor in ensuring that clinical trials are collecting only the needed data, Bertagnolli said.

“It’s focusing on answering the questions the patients and doctors need,” Bertagnolli said, describing Pragmatica-Lung. “The data collected is going to be overall survival. It’s not going to be a huge list of concomitant medications. It’s not going to be adverse events with start and stop dates. It’s not, you know, telling you about a lot of things that we kind of have a knee-jerk reaction and just put into our studies, because, often, that’s what we’ve done.”

“So, very minimal eligibility criteria and, basically, no safety reporting other than for hospitalizations or toxicities that are not described in the safety endpoint.”

Relaxing the eligibility requirements will not only swifter accrual—it will encourage participation of patients who are more representative of the population.

“One of the things we want to do is integrate clinical research—and clinical trials, but clinical research—into the clinical care environment. And, you know, we keep talking about this, but there are so many things that may have made research one direction, incredibly labor intensive, set aside, and parallel to clinical care,” Bertagnolli said.

“I’m sitting here now at Yale University, I’ve been at MD Anderson, I’ve been at DFCI, I’ve been at Sloan Kettering in my career. Not everyone can get to those places. It’s a very different population you see when you go to community practices—where more than 80% of patients are treated.” Herbst said.

“If we’re going to integrate clinical research into the clinical care environment—and this is big—we have to meet the needs of our clinical care providers to be able to conduct and participate in this research. You know, we can’t decide we’re throwing more burden and mandates on them,” Bertagnolli said.

“So, again, trial design is key. Does it serve the needs of the patient? Does it fit within the clinical trials environment in a way that doesn’t introduce excessive burden and that really compliments what happens in care delivery.”

Reducing the burden on physicians

“By having trials where the coordinator doesn’t have to read 50 pages, he or she gets 10, 12 pages and sees the trial is using two drugs that they already know how to use,” Herbst said. “These are the types of trials that can be run at the point of care, where people don’t have the desire or resources to travel far distances. They can be treated by their local doctors who they trust and they can get into these trials.

“Trials like this being less complicated, less expensive, it can be run at the point of care. The bottom line is that there is more access.”

Some academics and drug company executives were initially hesitant to pare down data collection, Herbst said.

“None of us believed him. We were like, ‘We can’t do this.’ Everyone got very nervous. And then the people that got the most nervous, of course the pharma companies, as they should, because they’re used to a very precise way of doing this.

“We have to do something different. Because immunotherapy, as one example, has changed the world in lung cancer, but we still have so many people who are succumbing to the disease,” Herbst said.

“I think people will be watching our trial. We will need to get it open quickly. We need to run it effectively and efficiently. And we’ll see how it goes. But I hope this will become the norm. Simpler trials, quicker to open, open in more diverse populations with access around the country.”

How is momentum maintained?

“This pragmatic trial is Pragmatic-Lung–Trial One. But I hope that when we next talk, there’ll be two or three of these. I also know there’s talk of one in melanoma right now, and I know the GI group is talking about it.” Herbst said.

“This is going to be the way to do it. Simpler trials, real-world, randomized, but getting it out to the entire nation, because that’s how you will get more diverse patients enrolled. What good are these drugs if we don’t get them to the patients who need them?”