Orszag discussed the 2010 budget at a meeting last week. 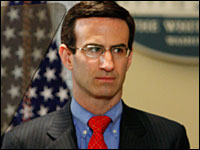 The Obama administration has gotten a coalition of health care groups to agree to voluntarily cut increases in projected health care costs. If they fail, the task of overhauling the nation’s health care system will become much harder and federal deficits will grow larger.

Some experts are saying similar ideas for reducing costs have been talked about for decades. But White House budget director Peter Orszag tells NPR’s Steve Inskeep that the industry cost-savings plan announced Monday is a big step toward overhauling the system.

He adds: “I do view this as a significant step forward.”

After meeting with President Obama on Monday, the coalition of health industry stakeholders announced they would voluntarily make changes that would cut increases in projected health care costs by $2 trillion over the next decade.

Orszag said the coalition’s plan is significant, but he said the administration will continue to look to the industry to make good on their commitments.

“Yesterday was a significant step forward, but it is also the case that we need to move forward and start filling in more of the details,” he said.