Anthony S. Fauci’s departure gives the Biden administration an opportunity to install the next generation of US leadership in biomedical research, but it must move swiftly with a Senate that’s losing some key NIH allies.

Fauci’s plan to step down in December after more than 50 years in government marks the end of a legendary career, advising seven presidents in his 38 years as director of the National Institute of Allergy and Infectious Diseases on outbreaks ranging from HIV to Covid-19.

“Now is the time to re-examine the portfolio and look for the kinds of leaders that can tackle the next generation of problems that will be emerging,” Esther Krofah, executive vice president of the Milken Institute Health, said.

Meanwhile some of the Senate’s strongest Republican biomedical research supporters are leaving at the end of the year. Their departures could make it more difficult to advance research-related items, even if the Democrats maintain their narrow majority.

The next leaders within the NIH and Senate must build relationships quickly, Parikh said. “You need that built-in level of trust before the crisis happens.”

Monday’s announcement is one of several research-related posts the White House must fill, including a National Institutes of Health director and an inaugural head of the Advanced Research Projects Agency for Health—a new biomedical innovation accelerator.

The White House already tapped the first woman, Harvard cancer surgeon Monica M. Bertagnolli, to run the National Cancer Institute, and Arati Prabhakar to serve as the Biden’s science adviser. Prabhakar would be the first woman, immigrant, or person of color confirmed to lead the White House Office of Science and Technology Policy if the Senate approves her nomination.

“This is an opportunity to bring in both a gender diversity that we have not necessarily seen in biomedical research at the highest level, but also representativeness from the communities themselves that have been suffering,” Krofah said.

Collins, who’s now the acting White House science adviser, has said he would like to see a woman or someone from an underrepresented community succeed him at the NIH. There’s been just one woman, Bernadine P. Healy, to serve as permanent NIH director.

Parikh said it would be wonderful to have nominees announced by Thanksgiving. “We had benefited greatly from this generation’s work,” he said. “We’re going to benefit from a generational change as well, which will bring women, people from different backgrounds, and from other parts parts of the country, into leadership positions.

“What we don’t want is for the transition period to last too long,” Parikh added. 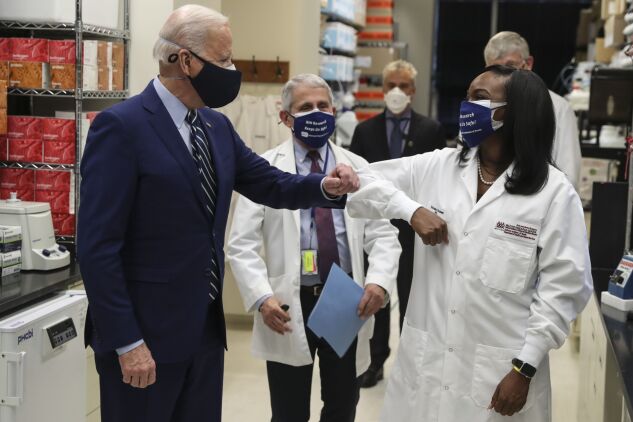 But both Prabhakar and the NIH director nominee must pass Senate confirmation. Congress has generally given strong bipartisan support to the NIH and biomedical research generally. But the HELP Committee last held an NIH director confirmation hearing more than two decades ago when George W. Bush nominated Elias Zerhouni.

Biden’s pick is unlikely to breeze through Capitol Hill the way previous directors have. The Senate confirmed Zerhouni a month later. Collins never had a hearing when the Senate unanimously confirmed him in 2009.

“The people who will be nominated for these jobs are going to come into a very polarized environment,” Parikh said. They’ll have to expend more energy on how they frame their vision for the future of the NIH, and checks and balances in the scientific community compared to their predecessors.

These lawmakers have demonstrated strong support for biomedical research as they oversee health programs and funding. But high up in seniority for the Senate HELP Republicans is Rand Paul (R-Ky.), who’s gone head-to-head with Fauci throughout the pandemic.

Ellen Sigal, founder of Friends of Cancer Research, also said there’s an expectation for the administration and Congress to move quickly to fill top NIH posts. But it’s just as important to get the right people into those jobs.

“There is no question that there’s a timing issue, but there has to be a quality issue,” Sigal said. “We need the right person, and they have to have the right credentials, because we’re facing public health issues that we’ve never seen before.”

With moneypox and Covid as well as the rapid pace of scientific advances, it’s important to find a replacement for Fauci who has his credibility and “ability to navigate the bureaucracy to be able to handle the things that we’re facing,” Sigal said.

In a response to a request for comment a White House spokesperson flagged its work in standing up its cancer advisory panel along with “cumulative legislative accomplishments that will fund biomedical discovery and access to treatments.”

Fauci’s shoes may not be as hard to fill as one might think, Mary Woolley, president of Research!America, said. “He already has made his institute and all of the NIH a model of a well-honed machine.”