On Thursday, October 13th, 2016, Friends of Cancer Research and the Deerfield Institute convened a briefing on Capitol Hill to discuss current and future regulatory issues related to genomic testing. Representatives from the multiple industries involved in genomic testing served on the panel, as well as representatives from patient advocacy and the FDA discussed ways to facilitate the continued innovation in precision medicine while also maintaining high standards for the accuracy and reliability of genomic tests.

The importance of molecular diagnostics to precision medicine was thoroughly discussed, as well as the initiatives accompanying precision medicine, such as the White House’s Cancer Moonshot and the Precision Medicine Initiative. Additionally discussed were the different uses for molecular diagnostics in precision medicine: to identify a patient’s susceptibility to a particular disease, the aggressiveness of that disease, the appropriate treatment options, and whether a patient’s disease will be resistant to certain types of treatment.

From there, the panel moved on to the topic of laboratory developed tests or LDTs, which are regulated by the Clinical Laboratory Improvement Amendments (CLIA) of 1988 and not the FDA. It was stated that despite a lack of FDA oversight, LDTs are subject to inspections and proficiency testing conducted by the College of American Pathologists (CAP), which allow labs to demonstrate the accuracy of their tests, and also allow them to compare the sensitivity of their tests to other labs.

The differences between the way FDA-approved and lab-developed tests are regulated were discussed, citing the most important difference of pre-market review, stating that only tests regulated by FDA undergo extensive pre-market testing and evaluation before being made available to patients. It was added that the presence of two separate regulatory standards for different types of molecular diagnostics could introduce variability into clinical practice. 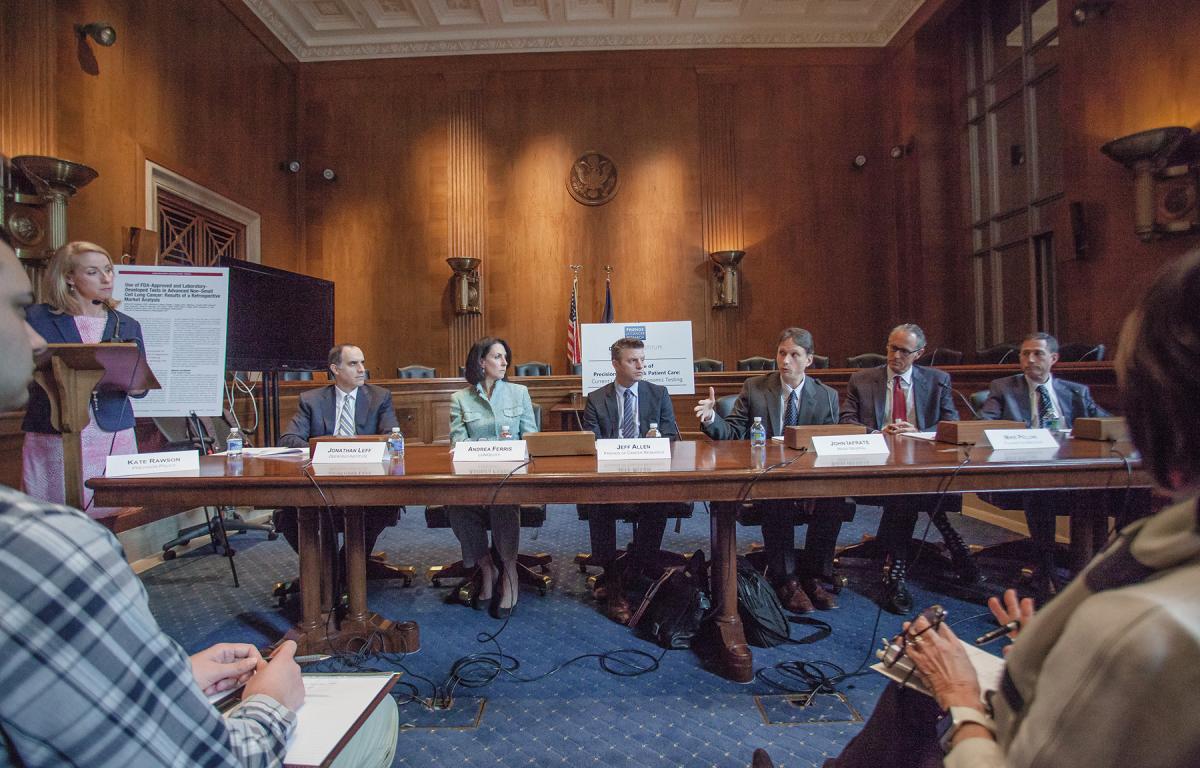 Recent research findings were discussed that demonstrate the prevalence of LDTs in the treatment of non-small cell lung cancer, a disease where the use of molecular diagnostics is widespread, owing to the presence of multiple targeted agents in that setting. The study did not assess the relative accuracy of LDTs or their FDA-approved counterparts, but rather highlighted the importance of further investigation of the issue, given the popularity of non-approved tests in everyday practice.

It was thought by some panelists that since the approval status of a particular molecular diagnostic test is not readily known by patients or their physicians in many cases, it’s irresponsible to put the burden on patients and community oncologists to determine the quality of the tests they receive or order, respectively.

The conversation then turned to the use of Next-generation Sequencing (NGS) platforms to conduct genomic profiling. Previously much of the conversation had centered around single-analyte tests, where a patient is tested for a particular gene alteration in order to gain access to a targeted therapy. NGS platforms, on the other hand, can assess hundreds and even thousands of gene alterations from a single tissue sample, and are widely used in research settings but are also being used in clinical practice

The conversation concluded by discussing the incongruence of the importance of molecular diagnostics to precision medicine and the lack of major investment in that space. The current regulatory framework was cited as a barrier to investment, owing to the fact that investors are uncomfortable investing in products that might easily get copied by labs not subject to FDA oversight. It was added that consistent regulatory oversight enables predictability, which is highly appealing to investors. The meeting ending on an optimistic note regarding what genomic tests can do for patients and for future research into the biological underpinnings of disease.